Onam is observed in honour of the successful administration that Mahabali, a legendary king who ruled Kerala. According to tradition, the devas and gods plotted to overthrow Mahabali because they were envious of his fame and dominance. They sent Vamana, a dwarf Brahmin, to Earth where he crushed Mahabali to patala (underworld). Vamanan requested from the kind Mahabali three feet of land as his wish. Mahabali consented to grant Vamana’s request because it is considered sacrilege to refuse presents to Brahmin. Vamana measured the entire universe with his first two feet, leaving no room for his third foot. In order to fulfil the wish, Mahabali offered his own head in the position of his third feet.Vishnu, seeing Mahabali’s generosity, granted the king’s lone wish to visit his land and people once a year. Every year, Kerala celebrates Mahabali’s homecoming as Onam.

Onam is the state’s official festival and a public holiday in Kerala. Most offices, banks, schools, and other institutions are closed on this day. Many institutions also observe a holiday on the first Onam, commonly known as Uthradom or Onam Eve.

Along with Vishu and Thiruvathira, Onam 2022 is one of three important festivals observed in Kerala. The Onam festival, which lasts 10 days, marks the start of the Malayalam New Year. Atham, Chithira, Chodhi, Vishakam, Anizham, Thriketa, Moolam, Pooradam, Uthradam, and Thiruvonam are the ten days. Thiruvonam, the festival’s final day, holds significant significance as it is the primary day of Onam. This day is observed by visiting temples dedicated to Lord Vishnu. Onam is celebrated with beautiful parades, boat races, cultural activities, and much more.

Day 1:Athan (the day King Mahabali prepares to leave Heaven for his kingdom on Earth).
Day 2: Chithira (the day when a flower carpet called Onam Pookalam is made).
Day 3 : The third day is the Chodhi Pookkalam (the day when A new layer of flowers is placed to the carpet. using four to five different types of flowers).
Day 4: Visakam (Fourth day of the festival,Various tournaments begin on this day).
Day 5: Anizham (the fifth day of the festival, when the boat race preparations begin).
Day 6: Thriketa (the festival holidays start today).
Day 7 :Moolam (special pujas are done in temples).
Day 8: Pooradam (Vamana and King Mahabali’s idols are erected in households on this day.)
Day 9:Uthradom (Mahabali arrives in Kerala on this day).
Day 10:Thiruvonam (The most important day, when King Mahabali is received with joy and devotion by the people of Kerala). 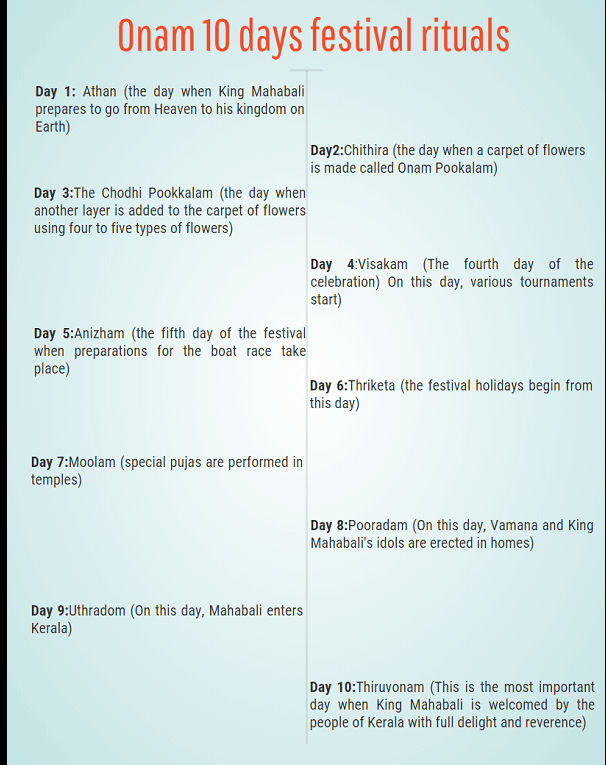 1.Which is the main day of Onam?
September 7, Uthradam: The first day of Onam, which falls on the Uthradam nakshatra day. On this day, the pookkalam, or floral carpet, customarily comes to an end. This is also the day when homes prepare for the festival’s main day. September 8, Thiruvonam: The second and most important day of Onam.
2.How do we celebrate Onam festival?
Onam is an annual harvest festival celebrated in the Indian state of Kerala. It is the state’s official festival and includes a variety of cultural events, making it an important annual event for Keralites. Onam is a Hindu festival that honours King Mahabali and Vamana.
3.where is onam celebrated generally?
Onam is a Malayali celebration that takes place in the month of Chingam. The festival celebrates the appearance of Vishnu’s Vamana avatar and the subsequent return of the mythical King Mahabali. Onam is the most prominent festival in Kerala, and it is held every year in August and September.

Women’s Equality Day 2022 – Why We Should All Care